I've been using the Samsung Ativ Pro as my main home laptop/tablet, it's a great artist tool and computer. I previously had the Samsung Series 7 Slate, and used Artdock for it. Artdock a great tool that allows you to disable touch for the tablet, except for the shortcut Artdock buttons. Essentially it gives you a bunch of hotkey buttons on the side of the screen, so that you can work without the keyboard. Someone made an Artdock for the Microsoft Surface Pro, and it worked on the Ativ Pro, but I didn't like the layout, and it did not have my most commonly used functions. Since I use Sketchbook Pro for 99% of my art, I got rid of the other programs with Artdock, and made it my perfect tool bar for Sketchbook Pro. As much as I would like to use Artdock with Photoshop, I just find it impossible to work without a keyboard.

I created a boring text bar first (right), but then created an image only tool bar (left). I found that when drawing and painting, I need a visual interface, using text icons just hurts my brain and slows me down. The beauty of Sketchbook, is in it's simple and visual interface, and I find a graphical Artdock interface work well for my workflow. I'm not sure if anyone else will find either dock useful, but figure I'd share them anyway.  This should work on Surface Pro as well, since they have similar resolution and screen size, and the original script that I modified from was for the Surface Pro. Since I don't have a Surface Pro, I can't tell for sure. If you have a Surface Pro, and have tried it out, please comment below!

When you first open up the ArtDock.ahk, you'll get a little bar on the bottom left of the desktop (below), where you can choose to use the Sketchbook Pro dock, or the Text Sketchbook Pro dock. You can also choose to ignore touch, so that only the tool bar will have touch. With touch on (by default), you could draw with your fingers, which happens accidentally enough to get a little annoying. If you decide to turn off touch, you'd need to log out of windows to take effect. With the Ativ Pro, you can also use Samsung Settings to turn off touch, but you still need to re log in to take effect. 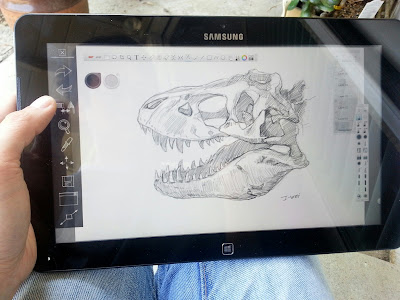 The tools on this Artdock should be pretty self explanatory. I've put my most commonly used tools where my natural thumb is when holding the device. At the top is redo, then undo. Undo is lower because it's easier to get to with my thumb, and I use it far more than I use redo. The Last Used Brush tool is one of my most used tools. I use it to switch between pencil and eraser, or between 2 paint brushes when painting and coloring. Zoom and move view is also something that I use constantly, as well as the eyedropper for sampling colors when painting. The Move/Rotate/Scale is also a tool that I can't live without, and deserved it's own button. I put Save As, as one of the buttons, because I am a little bit of a save freak, and like to save versions rather than save over files. Lastly, the bottom buttons are to hide/unhide the UI to maximize screen space, and zoom to full view. This give you the biggest and cleanest work area, for a small screen like this. These are the tools that I use most often, and mimics the buttons that I use on the Cintiq. If you feel the need to change the buttons, you can edit the ArtDock.ahk with notepad. I've made the buttons large enough for a finger, but not so large that it takes up too much screen real estate. If you need to adjust the size and placement, you can just edit the ArtDock.ahk text. I made the graphic icons just with the default pencil in Sketchbook Pro, so you can also add and change the images in the img folder, and change the hotkeys to fit the tool :)

This amazing script was created and modified by many. Originally developed as RawInputControlTest.ahk, and then Konartist3D modified for the Series 7 and ep121, then refined for the Surface Pro by DoctorBunsenHoneydew.

Instructions:
1) Install AutoHotKey
2) Download and unzip SBPDock
3) Double click on ArtDock.dhk and you are ready to go!