I loved the Mcpx, but it was underpowered, and difficult for my dumb thumbs to invert. I could flip it to an inverted hover, but barely able to recover from the bog. There is not much room for error on that machine, and it needed a level of control that I don’t process. Luckily with RKH upgrades, the thing is virtually indestructible. I’ve put that thing in the ground a few times with each pack, and yet to have anything break. When the 130x came out, I pretty much stopped flying the mcpx. It is stable and powerful, yet still small enough to fly in a small park. With RKH upgrades for the 130x, it flew like it’s on rails. Here is my previous review on the 130x and mcpx complete upgrades from RKH.

Then the Mcpx BL came out. Eflite addressed and improved greatly on the issues of power. With the Brushless and 2s power,  they’ve transformed a temperamental mosquito, into a twitchy beast. I am able to easily get in and out of inverted, unlike the brushed version that required a level of finesse that I lack. So when my friends at RKH asked me if I would like a review their upgrades for the Mcpx BL, I jumped at the chance. 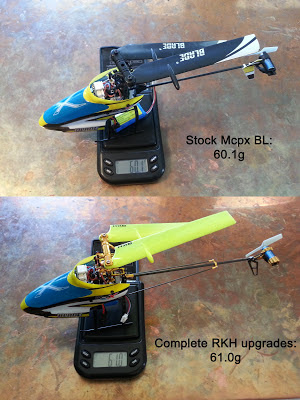 I opt for the “Gold” version of the upgrade, purely because it was different than RKH’s usual Silver or Red options. It is not a color that I’d normally have chosen, but I was curious what it looked like in person. I was afraid that it would be too gaudy, the bling out gold look just isn’t my style, since I prefer the boring Silver offerings. To my surprise, the gold reminds me more of Iron Man, not jewery gold. It looks cool.

Now, looks isn’t everything. If it doesn’t perform well, it would just look good collecting dust on the shelf. I’m happy to say that the complete RKH upgrade flies beautifully. To be honest, I’m not at the level that I could really notice a performance increase, but I know for sure that it fly great. Everything feels nice and smooth, and I am able to get out of some ugly inverted situations with no problems. I love the design of RKH’s products, they simply work as promised. When they first came on the scene with the 120 upgrades, there were some minor growing pains. But since then, all of the RKH parts that I've tried, fit and work perfectly.

Now the big question.... Weight? When upgrading from plastic to aluminum, weight is always a huge concern. Especially at this size, any small amount of weight gain is potentially problematic. I'm happy to say, that the weight gain is at 0.9 g (stock 60.1 g vs RKH 61.0 g ). The main frame is replaced by CF, which looks nice and is very strong and light. The tail boom was also replaced by a solid CF, as well as a solid CF main shaft. Tail boom supports were also added, and added tail heat sink. So when you add it all up, it's a miracle that the weight increase is less than a gram. I can not feel any difference in flying with this minimal weight increase. I also switched to the RKH yellow blades. They work great, and adds great visibility to the heli. 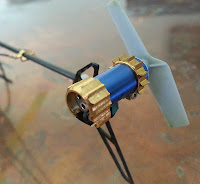 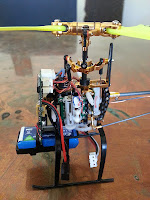 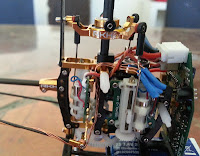 RKH also offer DFC setup, which I have yet to try. With the normal setup, the heli just flies perfectly. I’d have to say that the RKH 130x is still my favorite heli, but RKH Mcpx BL is a close second. Overkill? Yes of course! An ear-to-ear grinning Yes.